It has been an incredible year for Lil Nouns DAO in 2022. The DAO began with a strong start, with our first proposal submitted on June 7th, approximately one month after the Lil Nouns DAO auctions began. In this report, we will dive into the spending of Lil Nouns DAO from its inception through December 31st, 2022, to provide a year-end recap. We will examine the types of projects that Lil Nouns DAO has funded over the course of the last seven months, to understand where all of the ETH has been allocated and to highlight the outstanding work that we have accomplished as a DAO. Without further ado, let us dive into the data.

As the year came to a close, Lil Nouns funded approximately 52% of the proposals submitted on-chain, with 45 funded proposals out of 87 proposed. 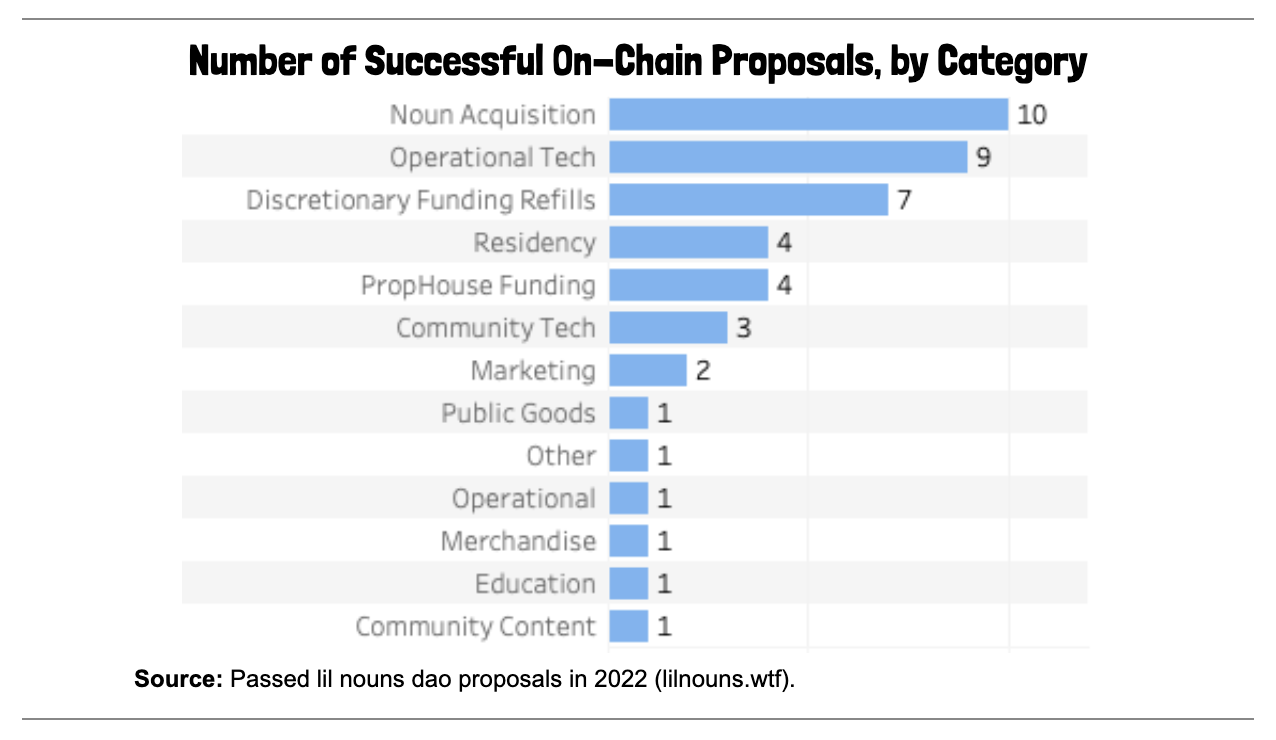 Lil Nouns has funded a total of 1,769.9 ETH in various projects, equivalent to approximately 2.6 million USD based on the current value of ETH. However, monthly spending has been inconsistent, with an average of 253 ETH per month from June to December 2023, and 153 ETH on average over the last three months (October to December). 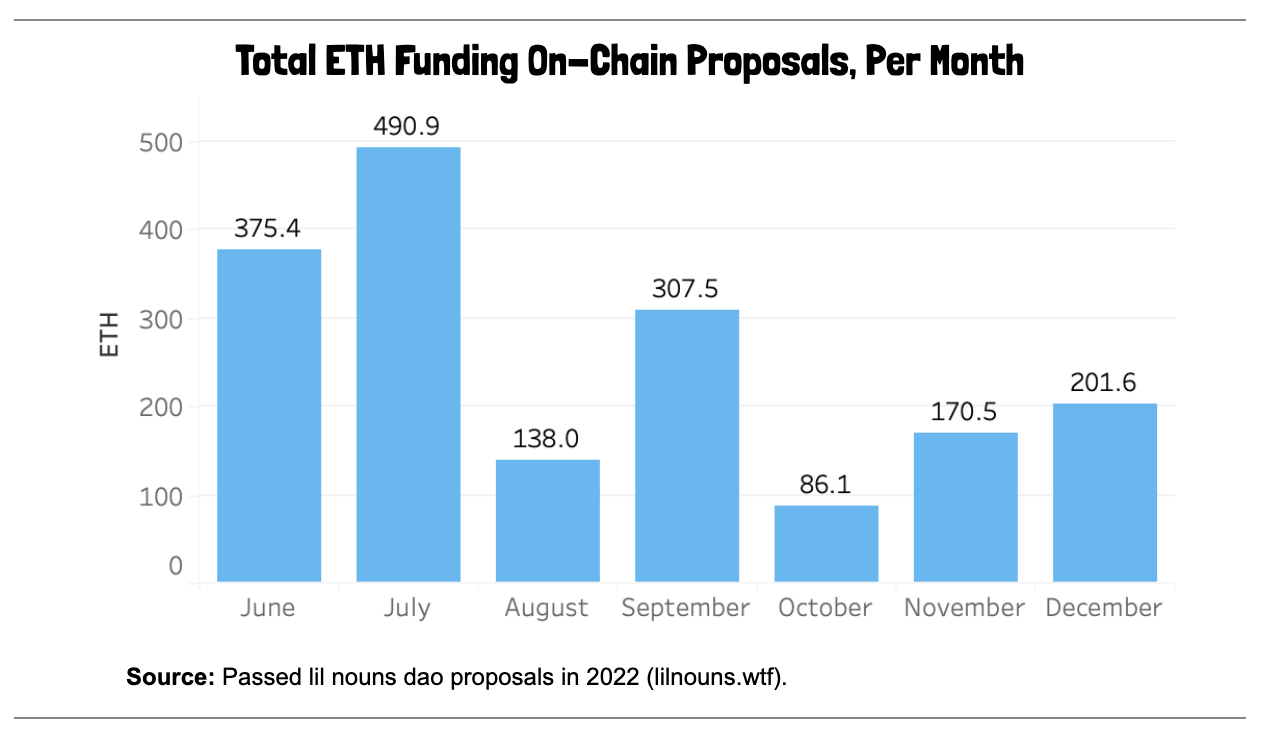 What did we spend all that ETH on?

Nouns… Nouns… and more Nouns!... We did what Lil Nouns do, and bought bigger Nouns! About 53% of funding had gone towards acquiring our first 15 Nouns! 18% has gone towards discretionary funding routes (like Lil Funding or Pods). And around 6% has funded PropHouse Rounds. 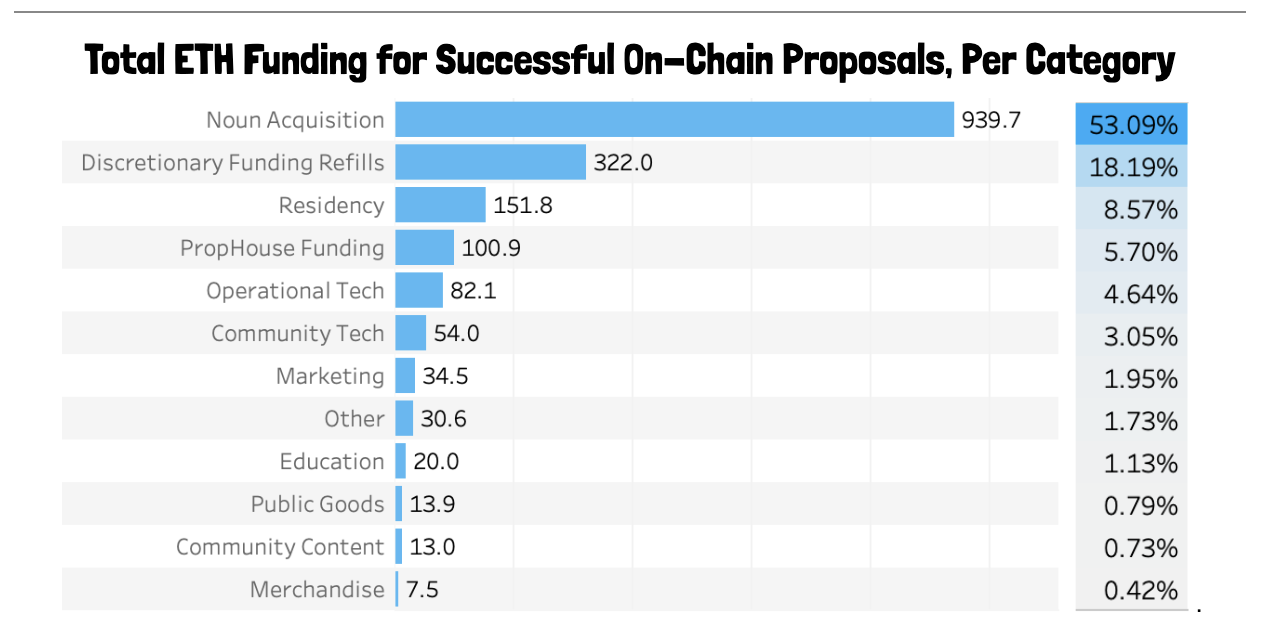 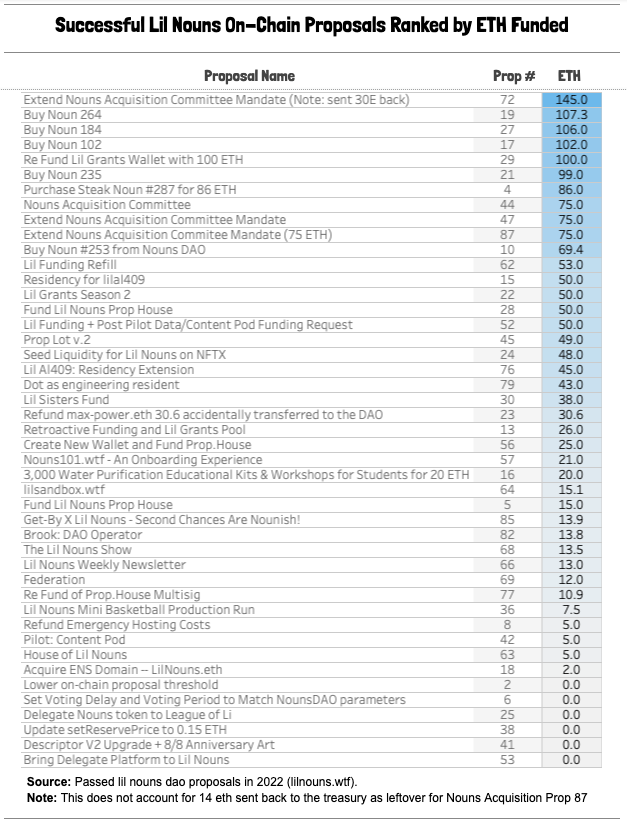 Sub-funding routes are when we as a DAO fund Pods, Lil Funding or PropHouse and then further distribute those funds to builders and contributors. These can be seen above in the breakdowns of on-chain proposals.

Approximately 423 ETH has been transferred into these routes since June, with approximately 385 ETH being spent. The breakdown of funds spent by Lil Nouns DAO sub-funding routes, such as PropHouse, Lil Funding, Lil Sisters Fund, Data Pod, and Content Pod, is provided below. Note: this does not include any unspent ETH that is still held in any of these funds. 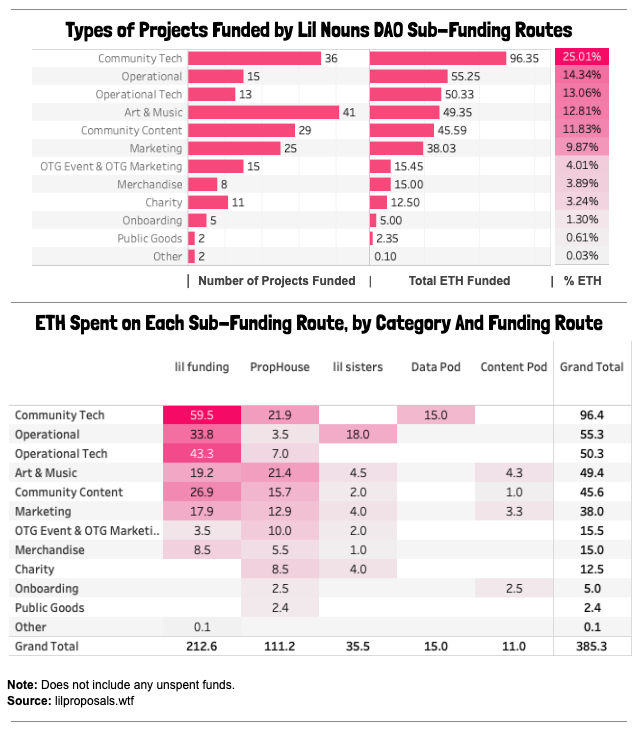 For this report we pulled data from on-chain proposals since the start of Lil Nouns, in June 2022 through December 31st 2022 (On-Chain Proposal #1 to #87). Any proposals successfully passed between the timeframe have been included.

I tapped into LilProposals.wtf and combined all of the data from each funding route.

I then worked with SQX, BK and some of the community to categorize each project by hand. Thank you both for the hard work here!

Data was pulled into Tableau Public to visualize.

To view the raw data that makes up this report, please see here: https://docs.google.com/spreadsheets/d/1RPiHImHwpH8DdfaeDownqwu6t_NkoKvouUJfVOYqS1Q/edit?usp=sharing